Below are some of our special canine family members which have passed over the Rainbow Bridge. They live on in our hearts forever.

​Bubba was our first water dog and the start of Bayswater Portuguese Water Dogs. We live on a lake and knew we wanted a dog that would be fun in the water. Boy we got that and a whole lot more! After having giant breed dogs (St. Bernard’s and English Mastiffs), we were use to quiet slow moving dogs. What a surprise Bubba was to both of us and our Mastiff. I can still see her running down the hill, jumping off the boat dock, retrieving her tennis ball and bringing it back to me. She wanted to do this all day long! We also owned horses at the time and Bubba became my companion on the trail rides. The giant dogs could never keep up, so they stayed home. For Bubba the more exercise the better and she loved doing everything. We agreed to show Bubba when we got her, so she and I went to classes to learn the ropes of the show ring. I showed her to her championship and she loved the show ring too.Then we went to the 1st PWDCA  National Specialty in New Jersey and got hooked on water trials. Bubba was an accomplished water girl.

Well, it's like we say, PWDs are like potato chips, you can't have just one. Rose,our second PWD, was probably the best friend I have ever had, although her granddaughter Razz is trying hard to fill her shoes. She was Rosebud to me and The Rose to everyone else. Rose came to us in the middle of winter from California and fit right in to our family. She was not your typical PWD. She was easy to live with and always wanted to please
us. Rose was the ideal mother and had several litters of very nice conformation and performance dogs. As you page through the website you will see many of them. Rose’s 3rdlitter was 14 puppies, and she insisted on taking care of all of them on her own. Taking care of puppies was one of her favorite thing to do. Training Rose was more complicated than Bubba, because Rose didn’t want to make a mistake. You might think that would make it easier, but no, she didn’t want to try anything until she was sure she knew exactly what I wanted her to do. We figured it out together and became a team. Rose lived a long healthy life and at the age of 14 received an Award of Merit at our National Specialty. This is quite an accomplishment for any dog and to obtain this at the age of 14 is almost unheard of. We have been blessed with longevity in our dogs. Rose lived to 2 weeks shy of her 16th Birthday, and Bubba was 141/2. 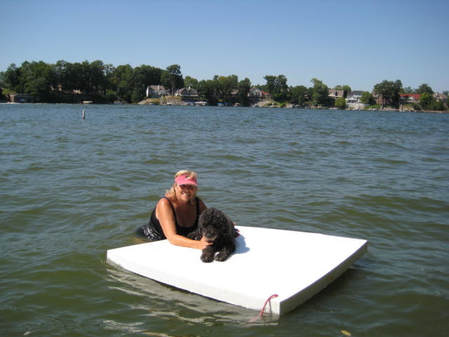 Esther was the real athlete of our crew. She had the most awesome jump off of our dock and the boat. Many people have asked me how I trained her to jump so high but no one taught it, she just came my it naturally, and so did most of her kids.  She was a great water dog, good at agility and did obedience, but only because I insisted. It was WAY too slow and boring for her. Esther produced many breed champions, and even more performance titled dogs. At our Specialty in 2011, Esther was awarded a PRODUCER OF MERIT AWARD which is a big honor. Only four dogs in our breed have ever achieved this title.  We are very proud to say we bred her, trained her and loved her. Esther was Jerry’s boating partner and whenever Jerry picked up the boat keys or a cooler, she was down on the dock waiting to go. She was also QUEEN of the raft at our house and dared any of the other dogs to try and get on her raft. She would be out in the lake floating on her raft and boats would stop to watch her as she would ride the waves. She was quite a character and will be forever missed by all of us.